Every Politician that runs for office makes all sorts of promises to the electorate. But these are mostly false promises that they do not fulfill and then blame the opposing party for blocking their promises, often even when their party is in power. We have always accepted that. We rail against them and gnash our teeth, but reelect them knowing they will not keep the promises they made.

Donald Trump was a different sort of candidate. He also made promises, but he intended to keep his and for the most part has.

In the office adjacent to the Oval Office where his personal staff work is a large whiteboard with all the promises he made. As each promise is achieved, a line is drawn through it. If a promise is partially achieved it is marked as “Partial”.

No other President has ever worked so hard to fulfill his promises.

No other President has achieved so much of what they promised.

He has done this in spite of unbelievable opposition from the Democrat Party that included a false Russia narrative, an impeachment, and the threat of a second impeachment. Despite a constant negative barrage from a media that no longer even pretends to be non-partisan or even truthful.

Yet, Donald Trump soldiers on, working tirelessly to fulfill what he promised. 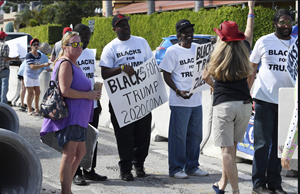 Below is a partial list of what he has achieved in his first term. You will never see this in the media, unless it is portrayed in a negative light. If you doubt any of it, research it. So easy to do now.

How President Trump has helped all Americans.

How President Trump has helped African-Americans.

What Trump Has Not Achieved.

President Trump has failed to involve us in any New Wars and in not doing so has saved the lives of countless American Soldiers. In fact he is responsible for drawing down overseas troop levels, exposing fewer of our sons and daughters in the military to danger.

How Democrats feel about Black Americans.

All content on this site is subject to copyright laws and may not be copied or reproduced in any form without written permission.

Powered By Digital Design and Hosting.